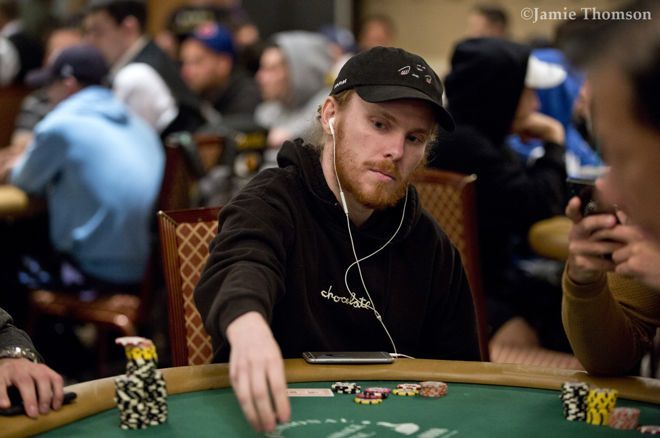 Ever find yourself at a final table where you pick up pocket aces, and for whatever reason — opponents’ tendencies, the table dynamic, or just a desire to mix things up — you decide not to raise preflop with them?

And do things ever go less than ideal for you from there?

That’s kind of the situation UK poker pro Tom Hall found himself in when at the final table of a WPT DeepStacks event in Nottingham not too long ago. Hall joined the fellows on The Chip Race podcast to revisit the hand and situation, and the discussion proved both entertaining and informative.

As Hall explains to David Lappin and Dara O’Kearney in the video below, one factor playing into his decision was that he had limped a few times before. The group talks a little about a similar hand they analyzed with Dominik Nitsche in which he limped with pocket queens. They then discuss the importance of balancing, limping strategy generally speaking, and the role ICM can play upon decisions like this one.

All fold and Manuel Zapf who had Hall covered checked from the big blind. The flop came

and both players checked. Some might think Hall should bet here, but as the group explain checking behind is actually the better play for a few reasons.

O’Kearney points out how Zapf having Hall outchipped allows him to apply ICM pressure and thus bet his one-spade hands here along with other possible holdings, and Lappin chimes in to talk about what hands Hall could have folded to the turn bet. Hall then adds how if he were in Zapf’s place he’d be bluffing with a lot of hands.

Hall also says he feels like by the turn he was already « bricking it » and that Zapf (who hadn’t been playing all that loosely) likely wasn’t bluffing and had him beat.

The river brought the

Now what? Hall actually called quickly, though as the discussion shows the decision between calling and folding is quite close. What would you do?

Take a look to hear the discussion and see how things turned out for Hall:

The Chip Race is a weekly podcast sponsored by Unibet Poker, and can be heard on iTunes and anywhere else you listen to podcasts. Follow David Lappin on Twitter @dklappin and Dara O’Kearney @daraokearney.

Be sure to complete your PokerNews experience by checking out an overview of our mobile and tablet apps here. Stay on top of the poker world from your phone with our mobile iOS and Android app, or fire up our iPad app on your tablet. You can also update your own chip counts from poker tournaments around the world with MyStack on both Android and iOS.