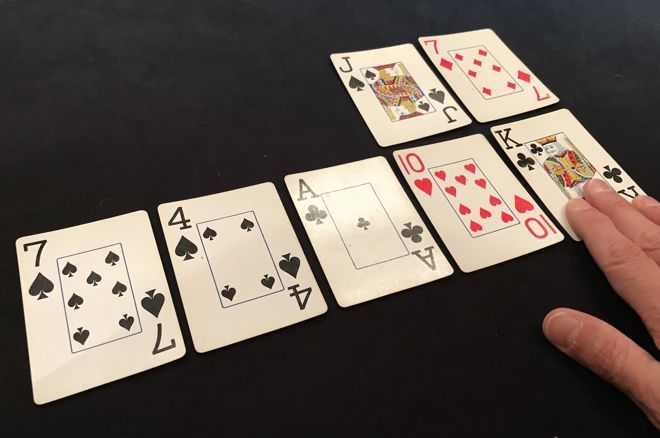 The concept of « running it twice » is well known, especially among high rollers. The idea is relatively simple.

Let’s say two people are all in on the flop. Instead of just « running » (or dealing) the turn and the river once to determine a single winner, the players agree to have the dealer deal out the turn and river two times.

The winner of each runout takes half the pot.

Similarly, players can run it three or four times (or any other amount), each time dividing the pot by the number of times the runout is dealt.

One of the most common questions I get asked is whether or not running it multiple times affects our odds of success, especially if the same deck is used and the cards are not reshuffled (which is usually the case).

The answer is: It does not!

The only thing running it twice (or more) does is to reduce our overall variance while keeping our expected value (EV) intact.

In other words, by running it two or more times not only we will make the same amount of money in the long run, but also our bankroll will fluctuate less.

OUT NOW: Check out the best real money poker sites in 2020!

Why Exactly Is It that Our EV Stays Intact?

To understand the mathematical reason behind this truth more deeply, it is helpful to look at a simplified example.

Let’s imagine a made-up situation in which we have a flush draw, but instead of a full deck, let’s say that:

For simplicity’s sake, we will first attempt to run it once and then run it four times (so that we exhaust the entire deck).

That way, we can follow the numbers more easily, thus gaining intuition as to why they behave the way they do.

Here are our assumptions:

Question 1: What are the chances of Hero winning the hand by running it ONCE?

The easiest way to answer this is by computing the three distinct winning scenarios for the Hero. Namely…

Not too shabby! Although we should note that this result is skewed upwards from the real thing, since we assumed two outs from 8 unseen cards, whereas in reality when we have a flush draw on the flop we have nine outs from 47 unseen cards, which is significantly less.

READ ALSO: Visiting a New Poker Room? You Better Ask These 7 Questions Before You Play

Question 2: What happens if we run the entire deck? (for a total of 4 runs)?

Since there are just two spades left in the deck, there are only two possible cases:

Final Question: What is Hero’s EV if we run it four times?

To answer this, we need to know how frequently each case happens.

It is easier to compute the relative frequency of Case 1.

We already saw that hitting both the turn and the river happens 3.6 percent of the time.

Thus, Hero has a 3.6 percent chance per run to hit both spades:

Therefore, Case 1 happens 14.4 percent of the time (netting Hero a quarter of the pot).

Meanwhile, Case 2 must occur the remaining 85.6 percent of the time (netting Hero half the pot).

When it comes to mathematical chance, a « quarter » is 0.25 and a « half » is 0.5. Thus a simple calculation shows that the expected value of hero running it 4 times is:

…which is precisely the same number we found above!

Conclusion: Hero’s and Villain’s EV were not affected by the multiple runs!

In the scenario above, Hero « deserves » exactly 46.6 percent of the pot.

Those last couple of points help reveal a rather common misconception among players who think that when they have a draw, they should run it multiple times.

Their rationale is that they have a higher chance to chop the pot. Although this is undoubtedly true, what they may not realize is that they pay back that extra equity when they do not chop.

Although the scenario above is made up, it is nevertheless a risk-free bet for Villain who can never lose more than half the pot.

Villain does sacrifice a bit of equity the majority of the time (85.6 percent), but Villain does get to keep three-quarters of the pot once in a while (14.4 percent), making a huge profit!

All that without having to risk ever losing the pot. One could say that Villain is perfectly hedged.

The above point also shows the benefits of running it multiple times with regards to reducing variance and consistent earnings.

the more times we run it, the more frequently we get what we « deserve » (or close to it).

Konstantinos « Duncan » Palamourdas is a math professor who specializes in the mathematics of poker. When not at the poker tables, Duncan can be found teaching poker classes at UCLA extension to people of all levels. His passion for simplifying complex poker concepts has also led to a poker book titled « Why Alex beats Bobbie at Poker« . You can follow Duncan on twitter @AskTheMathDr.

Four Mistakes Beginners Make at Online Poker When Starting Out

WPT GTO Trainer Hands of the Week: Three-Betting on your Button